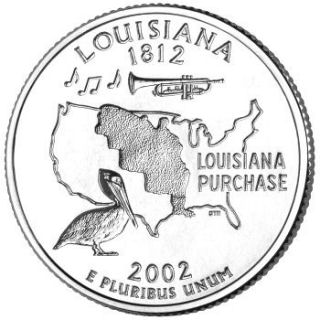 The Louisiana quarter, the third quarter of 2002 and eighteenth in the 50 State Quarters® Program, displays the image of Louisiana's state bird -- the pelican, a trumpet with musical notes, and the outline of the Louisiana Purchase territory, along with the inscription "Louisiana Purchase".

Thomas Jefferson bought the Louisiana Territory from Napoleon Bonaparte in 1803 for $15 million. Dubbed the "greatest real estate deal in history" the Louisiana Purchase added thirteen new states to the Union, nearly doubling its size and making it one of the largest countries in the world.

The trumpet on the coin is a tribute to the state's heritage of jazz music, a genre heard and played by millions of enthusiasts around the globe. Jazz was born in New Orleans over a hundred years ago, a combination of elements from blues, ragtime, and marching band music. A multitude of musicians propelled jazz from New Orleans' French Quarter onto the world stage, making the style a dominant force in 20th Century music.