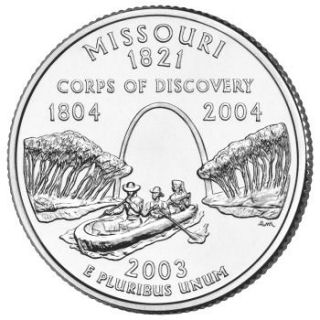 While much of the state’s history is tied to the mighty rivers that flow through it, the "Show Me State" got its nickname because of the devotion of its people to simple common sense. In 1899, Rep. Willard D. Vandiver said, "Frothy eloquence neither convinces nor satisfies me. I'm from Missouri. You've got to show me." It is easy to imagine President Thomas Jefferson saying "show me" as he sent Lewis and Clark forth on their trek into the uncharted Louisiana Purchase territory. Their 8,000-mile journey westward and back, which some claim was the greatest U.S. military expedition ever, began in St. Charles, Missouri just 20 miles west of St. Louis, in 1804 and ended when they returned to St. Louis, Missouri in 1806.