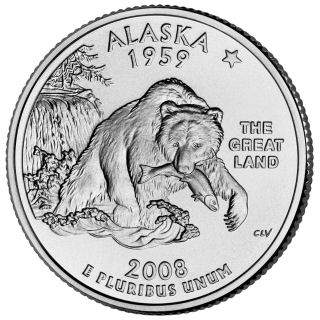 The fourth quarter released by the United States Mint in 2008 commemorates the State of Alaska. It is the 49th coin to be issued in the Mint's 50 State Quarters Program. On January 3, 1959, Alaska became the 49th state to be admitted into the Union. The reverse of the Alaska quarter features a grizzly bear emerging from the waters clutching a salmon in its jaw. The coin's design includes the North Star displayed above the inscription "The Great Land" and the inscriptions "Alaska" and "1959."

The grizzly bear and salmon symbolize Alaska's natural beauty and abundant wildlife, with the bear representing strength and the salmon representing the nutrition that provides for this strength. The grizzly flourishes in Alaska and can be observed in places such as Denali and Katmai National Parks, Kodiak Island and Admiralty Island. More than 98 percent of the United States' grizzly population is found in Alaska.

The word Alaska comes from the Aleutian word "Alyeska," meaning "The Great Land." Populated by Indians, Eskimos, and Aleuts for centuries, Alaska was not explored by Europeans until 1741. Russia established a colony in Alaska to protect its lucrative fur-trading interests, but sold Alaska to the United States in 1867 for $7.2 million, or two cents per acre, when it could no longer afford to maintain the colony. Although the purchase was derided by many in the United States at the time, its worth became apparent following late 19th century gold rushes and the discovery of oil in the mid-20th century.