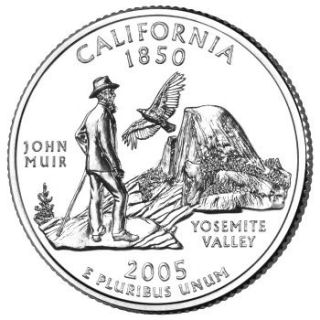 In 1849, the year before California gained statehood, the family of 11-year-old John Muir emigrated from Scotland to the United States, settling in Wisconsin. In 1868, at the age of 30, Muir sailed up the West Coast and landed in San Francisco. He made his home in the Yosemite Valley, describing the Sierra Nevada Mountains as "the Range of Light" the most divinely beautiful of all the mountain chains I have seen." He devoted the rest of his life to the conservation of natural beauty, publishing more than 300 articles and 10 books that expanded his naturalist philosophy.

In 1890, Congress established Yosemite National Park, and in 1892 John Muir helped form the Sierra Club to protect it, serving as that organization's President until his death in 1914.

The California condor, with a wingspan as long as nine feet, is also featured on the coin in a tribute to the successful repopulation of the once nearly extinct bird.