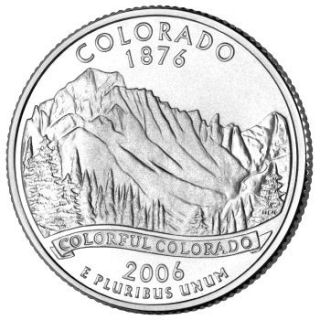 The third commemorative quarter-dollar coin released in 2006 honors Colorado, and is the 38th coin in the United States Mint's 50 State Quarters® Program. The Colorado quarter depicts a sweeping view of the state's rugged Rocky Mountains with evergreen trees and a banner carrying the inscription "Colorful Colorado." The coin also bears the inscriptions "Colorado" and "1876".

Colorado's Rocky Mountains are home to some of the Nation's most majestic natural wonders. Among these, rising approximately 10,000 feet from the valley floor in Northwest Colorado, Grand Mesa is the largest flat-top mountain in the world, and is home to more than 200 lakes and many miles of scenic hiking trails.

Colorado was admitted into the Union on August 1, 1876, becoming our Nation's 38th state. With statehood gained less than one month after the 100th anniversary of the signing of the Declaration of Independence, Colorado is nicknamed the "Centennial State".