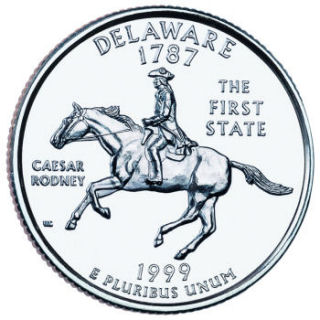 The Delaware quarter, depicting the historic horseback ride of Caesar Rodney, galloped onto the scene as it kicked off the much anticipated United States Mint's 50 State Quarters® Program.

Caesar Rodney was a delegate to the Continental Congress. On July 1, 1776, despite suffering from asthma and cancer, Rodney set off on the 80-mile journey to Philadelphia withstanding thundershowers and a severe summer heat wave. The next day, he arrived at Independence Hall just in time to cast the deciding vote in favor of our nation's independence. This native of Dover has also held more public offices than any other Delaware citizen. In addition to being an extremely dedicated delegate, Rodney was also a soldier, judge, and speaker of Delaware's Assembly.