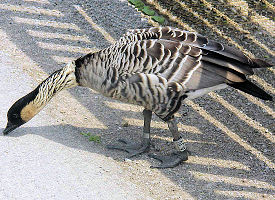 The Hawaiian Goose or Nene (Branta sandvicensis), is a species of goose that is exclusively found on the islands of Maui, Kauai and Hawaii.

The male Hawaiian Goose has a black head, buff cheeks, heavily furrowed neck Bill, with black legs and feet. It has strong toes that have much reduced webbing, an adaptation to the lava flows on which it breeds. It mates on land unlike most other wildfowl. The young birds are as the male but duller brown and with less markings between the colors of the head and neck, and striping and barring is much reduced.

The female of the species is similar to the male in coloring but slightly smaller.