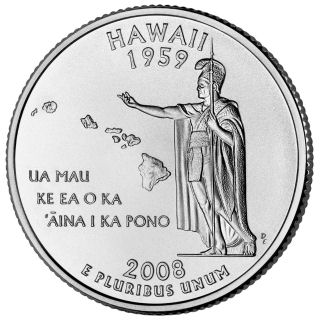 The fifth and final quarter-dollar coin released in 2008 honors the State of Hawaii, and is the 50th and last coin in the United States Mint's popular 50 State Quarters Program. Hawaii, spelled "Hawai'i" in the Hawaiian language, is nicknamed "The Aloha State." It became the 50th state admitted to the Union on August 21, 1959. The release of this quarter signals the end of the ten-year 50 State Quarters Program.

The reverse of Hawaii's quarter features Hawaiian monarch King Kamehameha I stretching his hand toward the eight major Hawaiian Islands. Inscriptions are the state motto "UA MAU KE EA O KA ‘ĀINA I KA PONO," ("The life of the land is perpetuated in righteousness"), "Hawaii" and "1959."

King Kamehameha I is a revered figure in Hawaiian history. He unified the governance of the Hawaiian Islands into one kingdom in the early 1800s and navigated changes in Hawaii, while maintaining the native practices and traditional ways of island life. His "Law of the Splintered Paddle" guaranteed the protection of citizens from harm during war and became a landmark in humanitarian law. He is honored with a statue in the U.S. Capitol's National Statuary Hall.