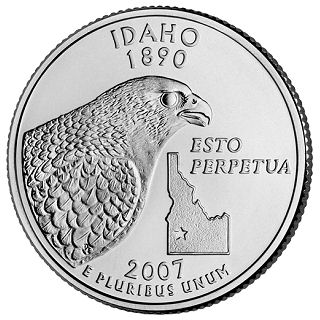 The third commemorative quarter-dollar coin released in 2007 honors Idaho, and is the 43rd coin in the 50 State Quarters® Program. Idaho, nicknamed the "Gem State," was admitted into the Union on July 3, 1890, becoming our Nation's 43rd state. The reverse of Idaho's quarter features the Peregrine Falcon imposing its presence above an outline of the State of Idaho. The coin bears the inscriptions "Esto Perpetua" (the State motto which means, "May it be Forever").

The Peregrine Falcon is one of the fastest birds in the world. Once on the endangered species list, it can now be found throughout Idaho and the United States because of conservation efforts.