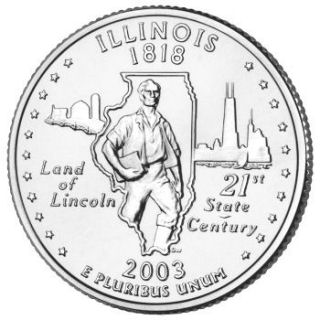 The Illinois quarter is the first quarter of 2003, and the 21st in the 50 State Quarters® Program. The Illinois quarter design depicts a young Abraham Lincoln within the outline of the state. A farm scene and the Chicago skyline appear on the left and to the right of the state's outline. Twenty-one stars border the coin, signifying Illinois as the 21st state to be admitted into the Union on December 3, 1818.

"The Prairie State," also commonly known as the "Land of Lincoln," pays tribute to our nation's 16th president. The young Lincoln lived and practiced law in Springfield before becoming one of our nation's greatest leaders. President Lincoln's historic home, burial site and new presidential library are all located in the Springfield area.