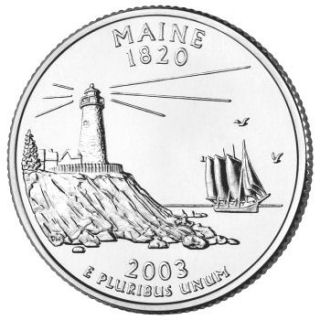 The Maine quarter is the third quarter of 2003, and the 23rd in the 50 State Quarters® Program. Maine became the 23rd state to be admitted into the Union, as part of the Missouri Compromise on March 15, 1820. The Maine quarter design incorporates a rendition of the Pemaquid Point Light atop a granite coast and of a schooner at sea.

Pemaquid Point Light is located in New Harbor, and marks the entrance to Muscongus Bay and Johns Bay. Since the beginning of ship activity in the area, a shoal created hazardous navigation conditions, causing many shipwrecks. As maritime trade increased in the area, so did the need for a lighthouse. In 1826, Congress appropriated funds to build a lighthouse at Pemaquid Point. Although the original building was replaced in 1835, and the original 10 lamps in 1856, the light is still a beacon for ships and remains one of Maine's most popular tourist attractions. The schooner resembles "Victory Chimes, " the last three-masted schooner of the Windjammer Fleet. "Victory Chimes" has become synonymous with Maine windjamming.