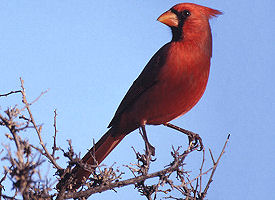 The Northern Cardinal (Cardinalis cardinalis) is a member of the North America cardinal family.

Males of the species are a bright, deep red with black faces and coral-red beaks. Females of the species are a fawn or light brown color, with mostly grayish-brown tones and a slight reddish tint in their wings and tail feathers, also with a bright coral-red beak. Both have prominent raised crests and strong beaks. Young birds are the colored like the adult females until they molt and grow their adult feathers in the fall.