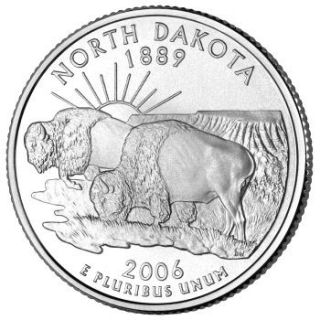 The fourth commemorative quarter-dollar coin released in 2006 honors North Dakota, and is the 39th coin in the United States Mint's 50 State Quarters Program. On November 2, 1889, North Dakota was admitted into the Union, becoming our Nation's 39th state. The North Dakota quarter depicts a pair of grazing American bison in the foreground with a sunset view of the rugged buttes and canyons that help define the State's Badlands region in the background. The coin's design also bears the inscriptions "North Dakota" and "1889."

President Theodore Roosevelt founded the United States Forest Service and signed the Antiquities Act in 1906, which was designed to preserve and protect unspoiled places such as his beloved North Dakota Badlands, now known as Theodore Roosevelt National Park. Herds of American Bison thundered across the Badlands through the 1860s. The park is now home to more than 400 wild buffalo, an animal once on the brink of extinction.