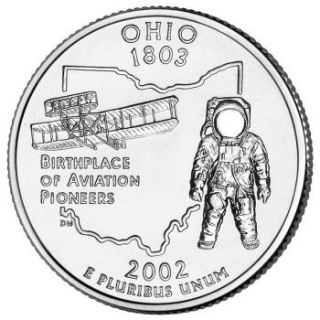 The Ohio quarter, the second quarter of 2002 and seventeenth in the 50 State Quarters® Program, honors the state's contribution to the history of aviation, depicting an early aircraft and an astronaut, superimposed as a group on the outline of the state. The design also includes the inscription "Birthplace of Aviation Pioneers".

The claim to this inscription is well justified, the history making astronauts Neil Armstrong and John Glenn were both born in Ohio, as was Orville Wright, co-inventor of the airplane. Orville and his brother, Wilbur Wright, also built and tested one of their early aircraft, the 1905 Flyer III, in Ohio.