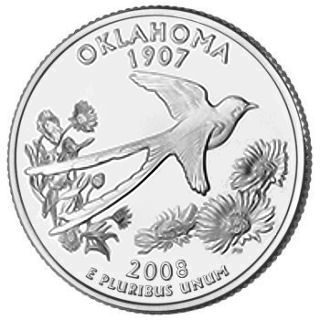 The first commemorative quarter-dollar coin released in 2008 honors Oklahoma, and is the 46th coin in the United States Mint’s 50 State Quarters® Program. Oklahoma, nicknamed the "Sooner State," was admitted into the Union on November 16, 1907, becoming our Nation’s 46th state.

The Oklahoma quarter features an image of the State bird, the Scissortail Flycatcher, in flight with its distinctive tail feathers spread. The bird is soaring over the State wildflower, the Indian Blanket, backed by a field of similar wildflowers. The coin’s design also bears the inscriptions "Oklahoma" and "1907."

The depiction of Indian Blanket (or Gaillardia) symbolizes the State’s rich Native American heritage and native long grass prairies that are abundant in wildlife. Oklahoma was formed by the combination of the Oklahoma Territory and the Indian Territory of the Five Civilized Tribes – Choctaw, Chickasaw, Creek, Seminole, and Cherokee. The State’s name is derived from the Choctaw words "okla" and "homma," meaning "red" and "people."