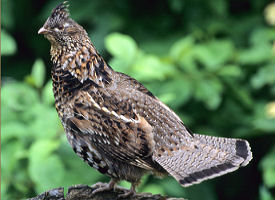 Ruffed Grouse have two color phases, grey and red. In the grey phase, adults have a long square brownish tail with barring and a black band near the end. The head, neck and back are grey-brown and they have a light breast with barring with ruffs located on the sides of the neck. These birds also have a mohawk type crest on top of their head, which sometimes you can see, but normally the feathers are flat on their head. The female of the species is smaller with less obvious ruffs and a shorter tail.