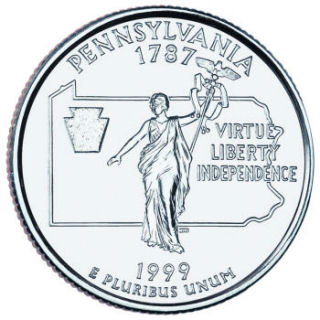 The Pennsylvania quarter, the second coin in the 50 State Quarters® Program, depicts the statue "Commonwealth," an outline of the state, the state motto, and a keystone. This design was chosen to further help educate people about the origins of our second state, founded on December 12, 1787.

The statue "Commonwealth," designed by New York sculptor Roland Hinton Perry, is a bronze-gilded 14' 6" high female form that has topped Pennsylvania's state capitol dome in Harrisburg, Pennsylvania since May 25, 1905. Her right arm extends in kindness and her left arm grasps a ribbon mace to symbolize justice. The image of the keystone honors the states nickname, "The Keystone State." At a Jefferson Republican victory rally in October 1802, Pennsylvania was toasted as "the keystone in the federal union." The modern persistence of this designation is justified in view of the key position of Pennsylvania in the economic, social, and political development of the United States.