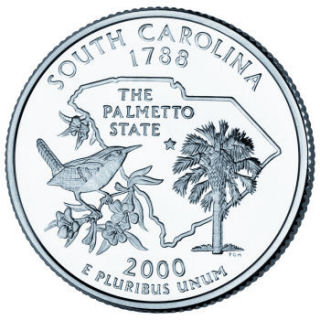 The South Carolina quarter, the eighth coin released under the 50 State Quarters® Program shows key state symbols- a Palmetto Tree, the Carolina Wren and the Yellow Jessamine. An outline of South Carolina, the nickname "The Palmetto State" and a star indicating the capital, Columbia, form the quarter’s background.

The Carolina Wren, the state bird, and the Yellow Jessamine, the state flower, are native throughout South Carolina; the importance of the Palmetto Tree, the state tree, dates back to the Revolutionary War. In 1776, colonists in a small fort built of Palmetto logs successfully defeated a British fleet trying to capture Charleston Harbor. Since then, South Carolina has been called "The Palmetto State".