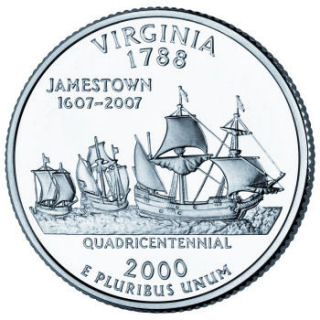 On April 10, 1606, King James I of England chartered the Virginia Company to encourage colonization in the New World. The first expedition, consisting of the three ships depicted on the quarter, embarked from London on December 20, 1606. On May 12, 1607, they landed on a small island along the James River nearly 60 miles from the mouth of the Chesapeake Bay. It was here the original settlers (104 men and boys) established the first permanent English settlement called Jamestown, in honor of King James I.