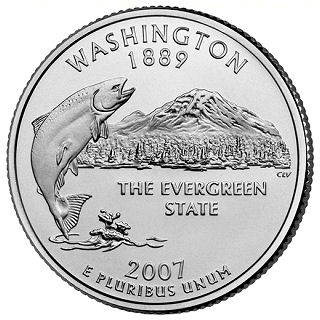 The second commemorative quarter-dollar coin released in 2007 honors Washington, and is the 42nd coin in the United States Mint's 50 State Quarters Program. Washington, nicknamed the "Evergreen State," was admitted into the Union on November 11, 1889, becoming our Nation's 42nd state. The reverse of Washington's quarter features a king salmon breaching the water in front of majestic Mount Rainier. The coin bears the inscriptions "The Evergreen State," "Washington" and "1889."

Mount Rainier is an active volcano encased in more than 35 square miles of snow and glacial ice. It is the symbolic bridge between the eastern and western parts of the State. The salmon is another important symbol of Washington. It is a traditional image of Pacific Northwest culture, and this fish has provided nourishment for the native peoples of the Pacific Northwest. Newsman and real estate pioneer C.T. Conover nicknamed Washington the "Evergreen State" because of its many lush evergreen forests.