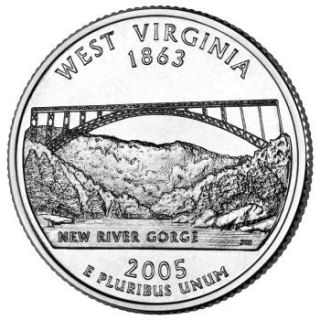 The fifth and final quarter to be released in 2005 commemorates the State of West Virginia. On June 20, 1863, the "Mountain State" became the 35th state to be admitted into the Union, making this the 35th coin to be issued in the United States Mint’s popular 50 State Quarters® Program. This coin captures the scenic beauty of the State with its depiction of the New River and the New River Gorge Bridge. The coin bears the inscription "New River Gorge".