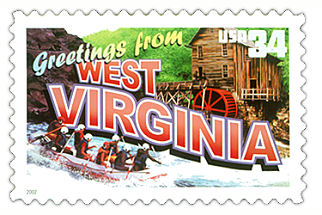 Depicted above is the West Virginia state 34 cent stamp from the Greetings From America commemorative stamp series. The United States Postal Service released this stamp on April 4, 2002. The retro design of this stamp resembles the large letter postcards that were popular with tourists in the 1930's and 1940's.