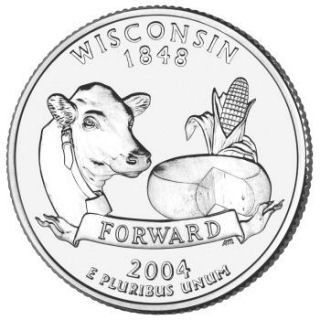 The Wisconsin quarter is the fifth of 2004, and the 30th in the 50 State Quarters® Program. On May 29, 1848, Wisconsin became the 30th state to be admitted into the Union. The Wisconsin design depicts an agricultural theme featuring a cow, a round of cheese and an ear of corn. The design also bears an inscription of the State motto, "Forward".

Wisconsin adopted the State motto, "Forward," in 1851, reflecting Wisconsin's continuous drive to be a national leader. Wisconsin is considered "America's Dairy Land" with production of over 15 percent of the Nation's milk. Wisconsin also produces over 350 different varieties, types and styles of award-winning cheeses – more than any other state. There are approximately 17,000 dairy farms, with just over one million cows that produce an average of 17,306 gallons of milk each, per year.