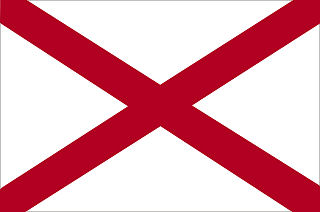 Depicted above is the state flag of Alabama. The flag of the state of Alabama is a symbol of the authority and sovereignty of the state and is a valuable asset of its people. The Alabama flag is flown over all state buildings just below the country flag of the United States of America.