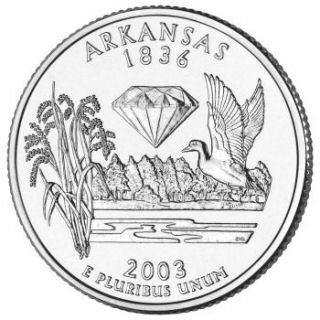 It is fitting that the "Natural State," Arkansas's official nickname, chose images of natural resources. Arkansas has an abundance of clear streams, rivers and lakes. In fact, Arkansas has more than 600,000 acres of natural lakes. Arkansas is also known for its sportsmanship and boasts mallard hunting as a main attraction for hunters across the nation. Visitors to Arkansas can search Crater of Diamonds State Park for precious gems including, of course, diamonds. The mine at Crater of Diamonds State Park reportedly is the oldest diamond mine in North America, and the only one in the United States open to the public-visitors get to keep what they find. Visitors can also experience "Rice Fever" in Arkansas-just the way W.H. Fuller did when he grew the first commercially successful rice crop in Arkansas. Soon after, thousands of acres of the Grand Prairie were changed to cultivate rice, and Arkansas became the leading producer of the grain in the United States.