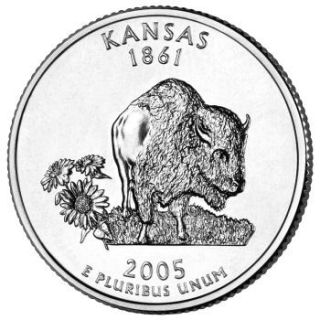 The fourth quarter to be released in 2005 commemorates the State of Kansas. On January 29, 1861, the "Sunflower State" became the 34th state to be admitted into the Union. Kansas marks the 34th coin to be issued in the United States Mint’s popular 50 State Quarters® Program, and features a buffalo and sunflower motif, emblematic of the State’s history and natural beauty.

The Kansas commemorative quarter incorporates two of the State’s most beloved symbols, the state animal and flower, the buffalo and the sunflower. Each of these two design elements is a visual reminder of our Nation’s heartland. They feature prominently in the history of the territory, and both were found in abundance throughout the State in the middle of the 19th century when Kansas gained its statehood. With its release in the Fall of 2005, it is the second United States circulating coin of 2005 to carry an image of the buffalo.