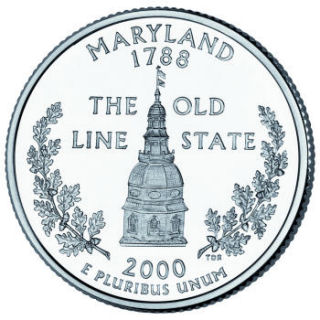 The Maryland quarter, the 2nd in the Year 2000 of the 50 State Quarters® Program, highlights the striking dome of the Maryland Statehouse.

Through its new quarter, our 7th state shares its pride for the honored Maryland Statehouse. A distinctive building dating back to 1772, it features the country's largest wooden dome built without nails. Besides housing Maryland's colonial legislature, it was also crucial to our national history. From 1783-1784, the Maryland Statehouse served as the nation's first peacetime capital. The Treaty of Paris was ratified here, officially ending the Revolutionary War. A treasure preserved, the Statehouse continues as the country's oldest state capital building still in legislative use.

Leaf clusters from the official state tree, the White Oak, and the nickname The Old Line State complete the selected design. Maryland is nicknamed the Old Line State in honor of its "troops of the line." These troops won praise from George Washington, who was Commander-in-Chief of the Continental Army during the Revolutionary War.