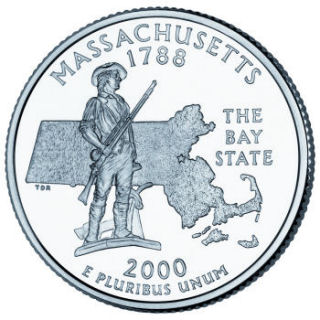 The Massachusetts quarter, the first quarter of the new millennium from the 50 State Quarters® Program, features a design of "The Minuteman," a famous statue that stands guard at The Minuteman National Historical Park in Concord, Massachusetts.

The selected design captures a piece of the Bay State's exceptional history. The Minutemen played a big role in protecting our nation, as they rallied together to help defeat the British during the Revolutionary War. These small, influential forces consisting of regular farmers and colonists, were always at-the-ready and were trained to assemble and fight on just a minute's notice-hence the term 'minutemen'.