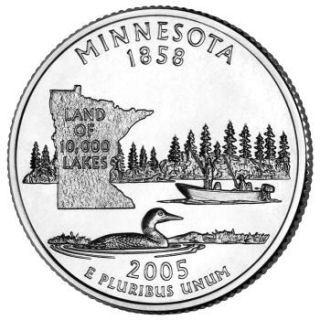 The second quarter to be released in 2005 commemorates the State of Minnesota, "Land of 10,000 Lakes." On May 11, 1858, Minnesota became the 32nd state admitted into the Union, and as such, it is the 32nd coin to be issued in the United States Mint's popular 50 State Quarters® Program. The design features a tree-lined lake with two people fishing, a loon on the water, and a textured outline of the State surrounding its nickname, "Land of 10,000 Lakes".

The "Land of 10,000 Lakes" actually contains more than 15,000 such bodies of water whose total shoreline exceeds 90,000 miles - more than California, Hawaii and Florida combined. Equally renowned as the home of the headwaters of the mighty Mississippi River, the name Minnesota is derived from the Dakota Sioux word for "cloudy water".

The natural beauty of Minnesota is vividly depicted on the reverse of this new quarter-dollar. Lined with Norway Pine, many of the lakes throughout the State offer much in the way of outdoor recreation, as well as providing a home for the graceful loon, Minnesota's state bird. Minnesota is also home to the Boundary Waters Canoe Area Wilderness. This one- million acre wilderness area was established by Congress in 1978, and contains more than 1,500 miles of canoe routes and nearly 2,200 designated campsites.