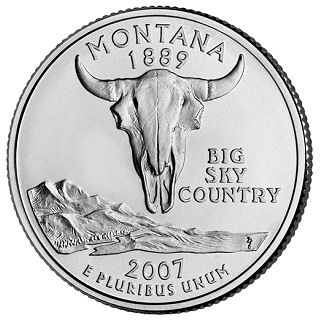 The first commemorative quarter-dollar coin released in 2007 honors Montana, and is the 41st coin in the United States Mint's 50 State Quarters Program. Montana, nicknamed "Big Sky Country," was admitted into the Union on November 8, 1889, becoming our Nation's 41st state. The reverse of Montana's quarter features a bison skull depicted above the diverse Montana landscape with the inscription "Big Sky Country." The coin also bears the inscriptions "Montana" and "1889."

The bison skull is a powerful symbol, sacred to many of Montana's American Indian tribes. This symbol can be seen across the State on schools, businesses and license plates, and reflects the rich native tradition of Montana, which was once home to large tribes such as the Crow and the Northern Cheyenne. After a visit from Lewis and Clark, Montana became a destination first for fur trappers and later for gold prospectors following the discovery of gold in the 1860s. Cattle ranchers also made their way west to Montana. This rapid growth in population led to boomtowns. The nickname "Big Sky Country" reminds residents of Montana's open lands and pioneering way.