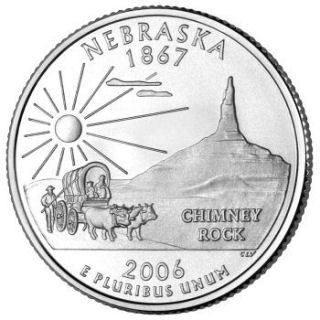 The second commemorative quarter-dollar coin released in 2006 honors Nebraska, and is the 37th coin in the United States Mint's 50 State Quarters® Program. Nebraska, nicknamed the "Cornhusker State," was admitted into the Union on March 1, 1867, becoming our Nation's 37th state. Nebraska's quarter depicts an ox-drawn covered wagon carrying pioneers in the foreground and Chimney Rock, the natural wonder that rises from the valley of North Platte River, measuring 445 feet from base to tip. The sun is in full view behind the wagon. The coin also bears the inscriptions "Nebraska," "Chimney Rock" and "1867".

Chimney Rock was designated a National Historic Site on August 9, 1956, and is maintained and operated by the Nebraska State Historical Society.

Practically anywhere travelers go in Nebraska they will encounter reminders of America's westward expansion. The state is crisscrossed by the Oregon and Mormon Trails, the Pony Express, the Lewis and Clark Trail, the Texas-Ogallala Trail and the Sidney-Deadwood Trail.