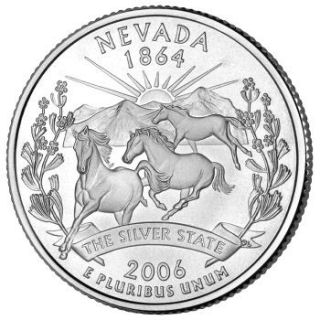 The first commemorative quarter-dollar coin released in 2006 honors Nevada, and is the 36th coin in the United States Mint's 50 State Quarters® Program. Nevada, nicknamed "The Silver State," was admitted into the Union on October 31, 1864, becoming our Nation's 36th state. Nevada's quarter depicts a trio of wild mustangs, the sun rising behind snow-capped mountains, bordered by sagebrush and a banner that reads "The Silver State." The coin also bears the inscriptions "Nevada" and "1864".

Nevada became a territory in 1861, several years after a Mormon Battalion in the Mexican War discovered gold and silver in the area of Virginia City. This discovery would later be referred to as one of the greatest mineral discoveries, famously known as the Comstock Lode.

Nevada is home to more than 50 percent of the Nation's wild horses. The wild horses dominate the Great Basin in the vast deserts and the more than 150 mountain ranges. The first mention of wild horses was discovered in several journals dating to the 1820s.