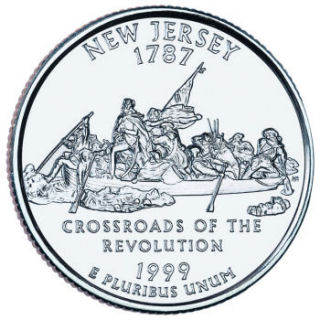 The New Jersey quarter, the third coin in the 50 State Quarters® Program, depicts General George Washington and members of the Colonial Army crossing the Delaware River en route to very important victories during the Revolutionary War. The design is based on the 1851 painting by Emmanuel Leutze, "Washington Crossing the Delaware," which currently hangs in the Metropolitan Museum of Art in New York City.

It was a cold Christmas night in 1776 and the Delaware River was frozen in many places. General George Washington calculated the enemy would not be expecting an assault in this kind of weather. He and his soldiers courageously crossed the Delaware River into Trenton, NJ. Using surprise as their greatest weapon, Washington's army captured over 900 prisoners and secured the town. Later that night, his army continued towards Princeton, NJ, again taking the enemy by surprise. These two victories proved very important to his army as they gave the soldiers courage, hope, and newfound confidence. The ammunition, food and other supplies confiscated from their captives also helped them survive the brutal winter of 1777.