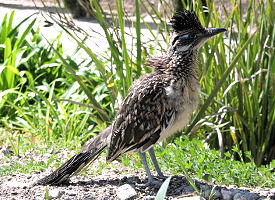 The Roadrunner or Greater Roadrunner (Geococcyx californianus) is a large, long-legged bird in the cuckoo family that nest on a platform of sticks in a cactus or bush.

Greater Roadrunner have a bushy crest and long thick dark bills and a long dark tail, a dark head and back, and are pale on the front of the neck and on the belly. Even though they capable of flight, they spend most of their time on the ground and can can run at speeds of 15 miles per hour or more, thus the name Roadrunner.