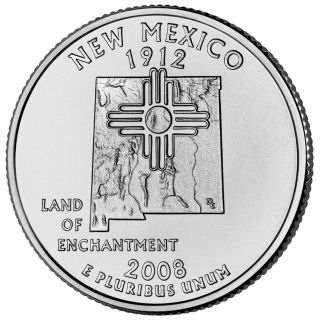 The second commemorative quarter-dollar coin released in 2008 honors New Mexico, and is the 47th coin in the United States Mint's 50 State Quarters Program. New Mexico, nicknamed the "Land of Enchantment," was admitted into the Union on January 6, 1912, becoming our Nation's 47th state. The reverse of New Mexico's quarter features a Zia sun symbol over a topographical outline of the State with the inscription "Land of Enchantment." The coin also bears the inscriptions "New Mexico" and "1912."

The great influence of Native American cultures can be found throughout New Mexico. The Zia Pueblo believe the sun symbol represents the giver of all good, who gave gifts in groups of four. From the circle representing life and love without beginning or end, the four groups of four rays that emanate represent the four directions, the four seasons, the four phases of a day (sunrise, noon, evening, and night), and the four divisions of life (childhood, youth, middle years, and old age).