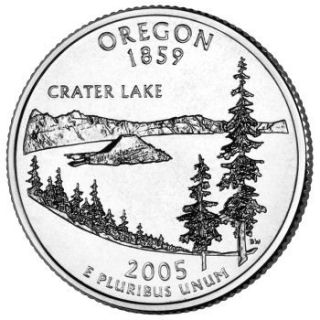 The State of Oregon is honored with the third quarter to be released in 2005, and the 33rd in the United States Mint’s 50 State Quarters® Program. On February 14, 1859, Oregon became the 33rd state to be admitted into the Union. Its coin design features a portion of Crater Lake, the deepest lake in the United States, viewed from the south-southwest rim. The design incorporates Wizard Island, as well as Watchman and Hillman Peaks on the lake’s rim and conifers. The coin bears the inscription "Crater Lake".

Crater Lake is a unique and stunning natural treasure, formed more than 7,700 years ago by the collapse of Mt. Mazama in what is now southern Oregon. At 1,949 feet, it is the deepest lake in the United States and the seventh deepest in the world, and has a record clarity depth of 134 feet. The main cause of Crater Lake’s remarkable clarity is its isolation from incoming streams and rivers.