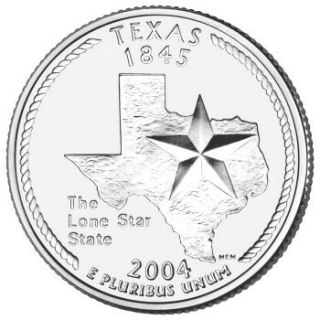 The Texas quarter is the third quarter of 2004, and the 28th in the 50 State Quarters® Program. On December 29, 1845, Texas became the 28th state to be admitted into the Union. The quarter's reverse design incorporates an outline of the State with a star superimposed on the outline and the inscription, "The Lone Star State." The lariat encircling the design is symbolic of the cattle and cowboy history of Texas, as well as the frontier spirit that tamed the land.

Texas comes from the Indian word "tejas," meaning friends or allies, and appropriately Texas's motto is "Friendship." Probably the two most recognized symbols of Texas are its unique shape and the lone star that is represented on the State flag. The Texas flag design was approved in 1839 to symbolize the Republic of Texas and was adopted as the State flag in 1845. The simple design of a lone star and three bold stripes of red, white and blue represent bravery, purity and loyalty, respectively. Texas is the only state to have had six different flags fly over its land; Spain, France, Mexico, Republic of Texas, Confederate States of America and the United States of America.