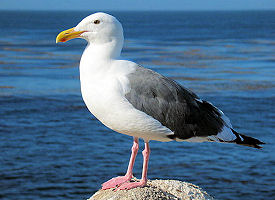 The California Gull (Larus californicus) is a medium-sized gull making the lakes and marshes in western North America its home.

Adults are similar in appearance to the Herring Gull, but have a smaller yellow bill with a black ring, yellow legs, brown eyes and a more rounded head. The body is mainly white with grey back and upper wings. They have black primaries with white tips. Immature California Gulls are also similar in appearance to immature Herring Gulls, with browner plumage than immature Ring-billed Gulls.