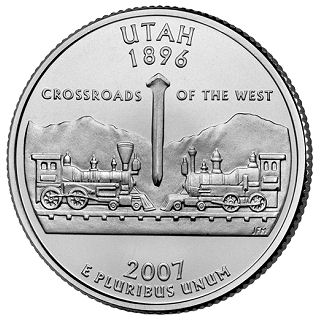 The fifth and final commemorative quarter-dollar coin released in 2007 honors Utah, and is the 45th coin in the United States Mint's 50 State Quarters® Program. Utah was admitted into the Union on January 4, 1896, becoming our Nation's 45th state. The reverse of Utah's quarter features two locomotives moving toward the golden spike that joined the Central Pacific and Union Pacific railroads, linking East to West and transforming both the Utah Territory and the Nation with the inscription "Crossroads of the West." The coin also bears the inscriptions "Utah" and "1896."

On May 10, 1869, two steam locomotives met at Promontory, Utah, for the "Joining of the Rails Ceremony," at which the Union Pacific and Central Pacific railroads completed the transcontinental route. The event was crucial to the development of the American West because it made cross-country travel more convenient and economical. The construction of the railroad, and the subsequent mining boom, brought diverse ethnic and religious populations to Utah. The railroad also symbolized the changing technology, and moved Utah from an agrarian economy to a more industrialized one.

Even before the time of steam locomotives, Utah experienced a steady flow of explorers and pioneers. The Spaniards first came to explore Utah in the 18th century and were followed by mountain men, Mormons and prospectors in search of precious metals found in the 1860s. Because of its central location, Utah became known as the "Crossroads of the West."