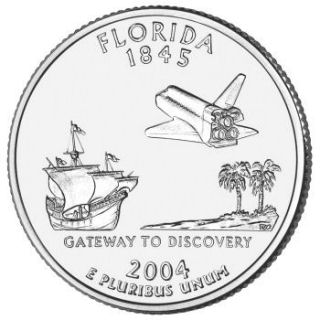 The Florida quarter is the second of 2004, and the 27th in the United States Mint’s 50 State Quarters® Program. On March 3, 1845, Florida became the 27th state to be admitted into the Union.

The design incorporates a 16th-century Spanish galleon, a space shuttle and the inscription "Gateway to Discovery." A strip of land with Sabal palm trees is also depicted.

On Easter in 1513, while searching for the legendary Fountain of Youth, Ponce de Leon named the region "Pascua Florida," meaning "Flowery Easter." In 1539, Hernando de Soto and other explorers continued the exploration of the New World through the region.

Florida, home to the Kennedy Space Center, has been the starting point for most of the modern era’s most significant scientific space expeditions – from Man’s first moon landing to the Voyager probe currently exploring deep space outside our solar system. From 16th-century Spanish galleons to 21st-century space exploration, Florida has played a continuing role in humanity’s quest for knowledge and discovery. With the highest average temperature of any state, and the second longest shoreline, Florida is one of the world’s most popular tourist destinations.