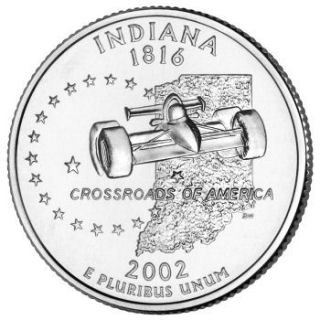 The Indiana quarter, the fourth quarter of 2002 and nineteenth in the 50 State Quarters® Program, represents the state pride in the famous Indianapolis 500 race. The design features the image of a racecar superimposed on an outline of the state with the inscription "Crossroads of America." The design also includes 19 stars signifying Indiana as the 19th state admitted into the Union.

The Indianapolis Motor Speedway is a 2.5 mile track built in 1909 for automotive research purposes. While the track was and is used for research, it is best known for hosting auto races, most famously, the Indy 500. The oldest auto race in the world, the Indy 500 has been run every year since 1911, except during the two World Wars. The winner of the first Indy 500 was Ray Harroun whose car, the Marmon Wasp, is thought to have been the first to have a single seat and to use a rearview mirror. In the time since Harroun's victory, the Indy 500 has become an international event, synonymous with auto racing.