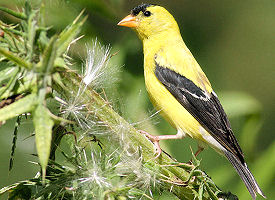 The Eastern or American Goldfinch (Carduelis tristis) is a typical North American seed-eating member of the finch family, averaging 4-1/4 inches in length that breeds across southern Canada from British Columbia to Newfoundland and through most of the United States north of the Gulf of Mexico and core Southwestern States.