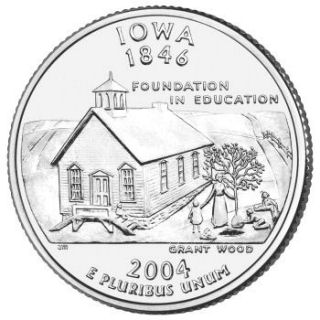 The Iowa quarter is the fourth of 2004, and the 29th in the 50 State Quarters® Program. On December 28, 1846, Iowa became the 29th state to be admitted into the Union. The Iowa quarter design features a one-room schoolhouse with a teacher and students planting a tree, and the inscriptions "Foundation in Education" and "Grant Wood." The design is based on "Arbor Day," a painting by Grant Wood, who was born near Anamosa, Iowa. He spent his career as a proponent of small-town values, which he celebrated in the iconic images of small-town plain folk and verdant Midwestern vistas for which he is world-renowned.

Iowans have had a commitment to education since the State's earliest days. When Iowa became a state in 1846, it already had a number of rural country schools in each of its counties. Iowa established its first high school in the 1850s, although high schools generally did not become widespread in the United States until after 1900. Private and public colleges also quickly took root in the new State.

Although Iowa has long been a leader in agriculture, the State is unique in that it is the only one whose east and west borders are completely formed by rivers - the Mississippi and Missouri Rivers.