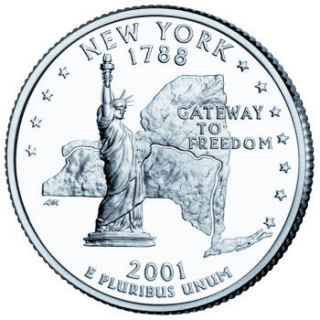 The New York quarter, the first quarter of the 2001 50 State Quarters® Program, features the Statue of Liberty superimposed over an outline of the state along with the inscription "Gateway to Freedom." Also incorporated into the state outline is a line tracing the Hudson River and the route of the Erie Canal.

This final New York design celebrates the "Empire State" as a point of entry for millions of immigrants seeking the political freedom and democracy that American citizenship provides. President Grover Cleveland accepted the Statue of Liberty, a gift from the people of France, on behalf of the United States on October 28, 1886. Lady Liberty was designated a National Monument on October 15, 1924 and underwent extensive restoration for her remarkable centennial on July 4, 1986. Governor George E. Pataki asked the United States Mint to add the line tracing the Hudson River and the route of the Erie Canal because of the vital developmental role of the waterways.