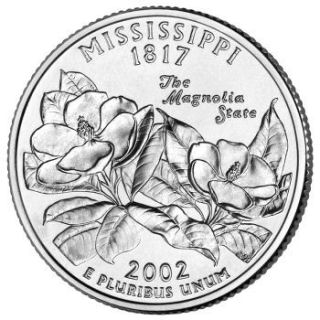 The Mississippi quarter, the fifth and last quarter of 2002 and 20th in the 50 State Quarters® Program, showcases the beauty and elegance of the state flower, combining the blossoms and leaves of two magnolias with the inscription "The Magnolia State".

Although there are several varieties of magnolia found throughout the world, it is the southern magnolia, or Magnolia grandiflora, that is native to the southeastern United States. Boasting large, showy white flowers as big as 15 inches across, they are named for the famed 18th century French botanist Pierre Magnol. Mississippi adopted it as the state flower in 1952.

In 1900, when Mississippi schoolchildren were asked to vote for a state flower, they selected the magnolia over a group that included cape jasmine, yellow jasmine and cotton. The selection remained unofficial, however, as the legislature did not act on the result. A similar election for state tree in 1935 gave the magnolia a landslide victory, one that was made official on April 1, 1938. On February 26, 1952, the Mississippi legislature finally adopted the magnolia as the state flower, opposed by only one vote.