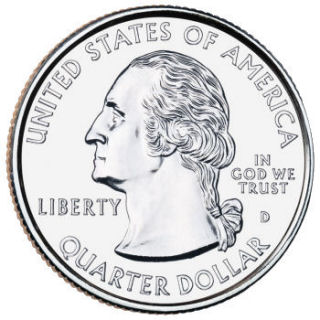 As part of the United States Mint 50 State Quarters® Program which honors the individual 50 states that comprise the United States through a series of circulating quarters being issued from 1999-2008, new quarters are realesed every 10 weeks.

State designs are recommended and submitted via a process determined by the governor of each state. The US Mint reviews the designs for coinability before each governor recommends a final design. Both the Citizens Coinage Advisory Committee and the Commission of Fine Arts provide comments.

These coins are being released under the 50 States Commemorative Coin Program Act [Public Law 105-124] signed by President Clinton which states "The Congress finds that it is appropriate and timely to honor the unique Federal republic of 50 States that comprise the United States; and to promote the diffusion of knowledge among the youth of the United States about the individual States, their history and geography, and the rich diversity of the national heritage..."

The 1932 US quarter dollar coin has not seen a design change since 1975-1976 in which the United States Mint produced Bicentennial quarters with a special patriotic reverse design. The 50 states are honored over a 10 year period with a reverse quarter design in the order in which state was admitted into the Union.

The United States Mint also offers educational materials and lesson plans in conjunction with the 50 State Quarters® Program to help educators bring the history of the program and its significance into the classroom.

Select a state quarter below to find out more about the state and the coin.